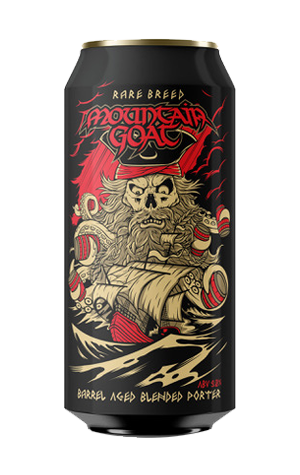 Combining rum with dark beers has become something of a habit at Mountain Goat over the years, and winter 2020 is no different as another Rare Breed leaves the brewery in the shape of this Barrel-Aged Blended Porter. Now they've got a distillery to play with on site, it might not be too long before they're able to mix and match beers and spirits in house, but this time around the beer has been put together in conjunction with Beenleigh Distillery, the oldest registered distillery in Australia – now a mere 136 years old.

Before their ex-rum barrels came into play, the Goat brewers created a base beer with six of their favourite Gladfield specialty malts out of NZ and a combination of Enigma and Sabro hops, the latter of which are known to contribute coconut like characters not too dissimilar to those you can extract from barrels. Three-quarters of the beer then underwent secondary fermentation in said barrels before the best of the oak-enhanced liquid was blended back with the other quarter.

When it comes to describing first impressions, opinion was divided at Crafty Towers; I went with rum and coke, Mrs Pint with Tia Maria, the Caribbean coffee liqueur. Either way, it comes bearing back bar vibes, vibes which are supplemented by the sort of dark fruits you pick up in many big porters and stouts and a fair lick of spiciness too. As it warms, the liqueur like elements retreat into the pack, slowly enveloped by dense chocolate cake flavours given a pillowy lusciousness courtesy of the oak.

For more on the beer head here