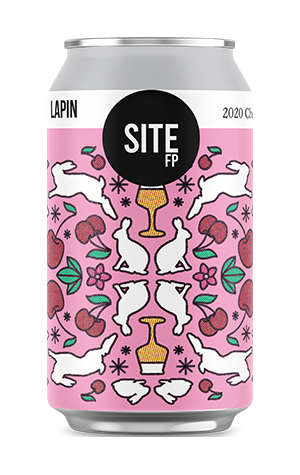 For the third year running, Hop Nation have bundled together Victorian-grown cherries and a mixed culture beer to create Lapin. Named after the cherries, Lapin 2020 sits under the brewery’s wild-focused Site Fermentation Project banner and uses fruit picked at the end of 2020 in a one-year-old sour blonde beer left to ferment on said cherries for four months inside Hop Nation’s 70-year-old Port foeder.

The new version might not pack the same boozy punch as the previous release but, having tried them next to each other, it’s safe to say the 4.8 percent ABV beer packs as much sour and funk into the can. Gone too is last year’s slightly marzipan notes, although it’s not only cherry at play; there's also an underlying citrus flavour that, along with a richness, brings to mind Madeira cake. The cherry is what leads the beer, however, both with regard to taste and how it looks, while there’s also quite a sharp, vinous quality and a funk that eventually fades.

Fortunately, since it's the kind of beer you may well like to enjoy with mates, it’s not just available in cans either – you can grab one of their limited edition 1.5 litre magnums too.