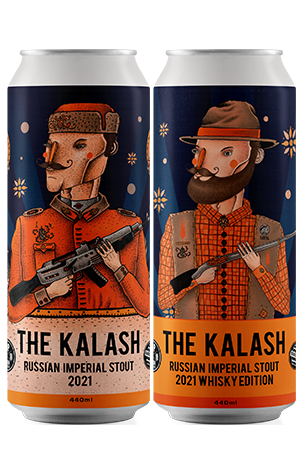 Best laid plans, hey? The Kalash is the kind of beer launch that gets the Hop Nation crew really excited, giving them the chance to not only showcase their annual Russian imperial stout but also pour variations and back vintages of the same beer. For 2021, the plan wasn’t just to serve up Kalash flights but partner it with local chocolate too, and while that delicious pairing is on hold, it'll take place once COVID restrictions allow. In the meantime, both the bourbon-aged Kalash and the Whisky Edition are out in 440ml cans, with Hop Nation putting together packs featuring previous vintages – available through their webstore.

As for what’s out this year, The Kalash 2021 is quite similar to 2020’s and spent four months ageing in bourbon barrels before the comrade was blended and served up at the same 10.7 percent ABV. It’s one that showcases the kind of complex mix of characters you might expect from a brewery that left the most recent AIBA dinner with an impressive number of trophies: incredibly vicious and providing notes of bitter dark chocolate, golden syrup, a touch of vanilla and roasted elements too.

For the Whisky Edition, it’s the second year Hop Nation have collaborated with Bakery Hill Distillery to add some of Kalash to single malt whisky barrels. The beer’s a little heavier on the booze at 11.7 percent ABV (not quite the bump last year’s had) but you don't need to rely on the higher ABV to know it's a different beer. A quick sniff quickly reveals a strong undertone of peated whisky notes and, while it does have some of the same sweet tones of the original, it's heavier with hits of spice and tar.