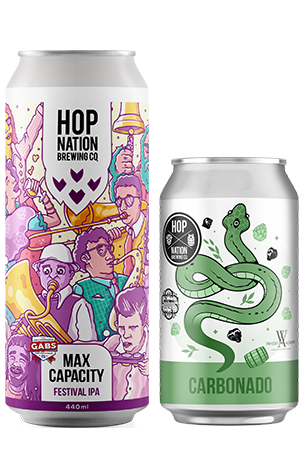 Hop Nation are well and truly celebrating the good times that come with Good Beer Week 2021, with the brewery releasing two limited cans to line up with the weeklong celebrations. Max Capacity was launched at GABS Sydney before being given a wider release in cans and the “Festival IPA” is the Melbourne brewery’s tribute to the haze of a beer festival. It’s a beer that doesn’t just pack a lot of tropical hop flavours but also a variety of hops (or rather, hop products) into one beer. There’s Galaxy that’s been added in the more traditional pellet form, then Mosaic in the shape of CO² Hop Extract (a process used to extract soft resins and essential oils from the hops) and Ekuanot Cryo Hop (which uses liquid nitrogen to freeze hop cones to create a particularly intense level aroma and flavour). As mentioned, it means the resulting beer is one that absolutely drips in tropical notes, including fresh, papaya, melon and mango, while tangerine and lime find a home in the Festival IPA too.

Carbonado was brewed in collaboration with Melbourne’s Whisky & Alement and the Scotch Malt Whisky Society with the brewery’s Karma oatmeal stout being placed in casks in February 2020 to be given a short time to condition for Good Beer Week of that year. Though that festival never was, the silver lining was that the beer got an extra year in barrel and is being served as a boilermaker throughout the week at Whisky & Alement, with details of that event here. The name Cabonado refers to black diamond, the toughest variety of diamond out there and it’s a fitting name too, not just because there’s not a lot of this beer out there but also because there’s a level of salinity which runs through it. What’s more present though is just how incredibly peaty the dark beer is, with it being noticeable as soon as you crack the can (potentially if you’re standing on the other side of the room too) and enveloping the entire beer while deep notes of tar and molasses start to become more noticeable as the beer warms.