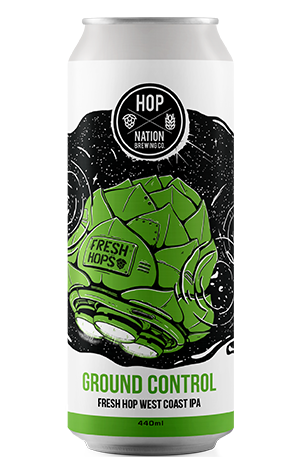 When Hop Products Australia unveiled the name of their newest proprietary hop, Eclipse, in November 2020, the hop grower teamed up with a dozen brewers and Beer Cartel to mark the launch with a special mixed pack dedicated to the hop. The dozen beers were an impressive showcase too, particularly thanks to the diversity of beer styles brewed to explore what Eclipse can do; sure it's nice to know what flavours a hop imparts on an IPA but its just as exciting to see the tasting notes on display in a lager, dark beer or hop-forward saison. That’s not to say there weren’t some impressive IPAs in the box though, Hop Nation’s David Bowie-inspired West Coast IPA, Ground Control.

In celebration of the most recent hop harvest, Hop Nation have rebrewed Ground Control with freshly plucked Eclipse from HPA's Buffalo River Valley farm which made the journey from farm to brewery on the back of a ute on March 4. The resulting beer contains many of the flavours which made the original Ground Control shine, including freshly-peeled mandarin, sweet pineapple and stone fruit but added to that is a piney prickle that coats the mouth plus some grassier notes that bring to mind a freshly-mown lawns.