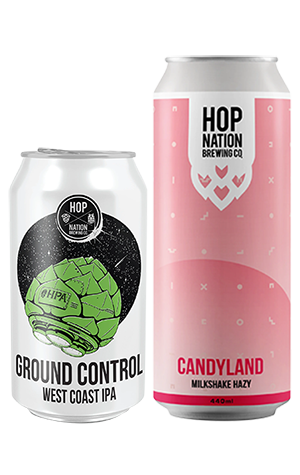 Hop Nation’s twin IPA releases in November manage to show off a new(ish) ingredient, a classic style, and craft brewing’s more modern direction. First up, Ground Control is a West Coast IPA brewed with Hop Product Australia’s newly-named Eclipse and is itself named after David Bowie's classic Space Oddity. It's a fitting showcase of Eclipse's mandarin-inducing qualities too, with Ground Control mostly singing that citrus note, joined by a little resinous pine and a quite prominently bitter finish.

From mostly a single note to many all at once, Candyland is a milkshake hazy IPA that features a new look for Hop Nation. It’s the Footscray brewery’s first in 440ml cans, which they’re planning more of, and their logo bears a slight change too. As for the beer inside, it’s one of cherry and raspberry and vanilla, along with the hops Rakau, Amarillo and Citra and, while those added adjuncts are most of the flavour drivers, the hop-derived fruitiness is in there too. Mostly, that’s in the shape of nectarine, along with a little pine in a sweet, soft and altogether cream-heavy milkshake IPA.