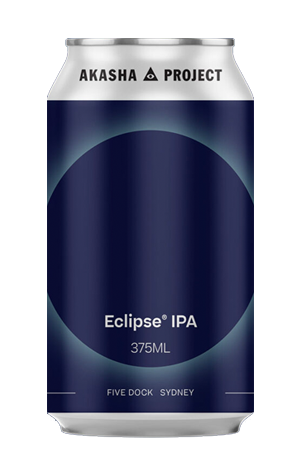 There’s something kind of thrilling about the official unveiling of a new hop variety. They go through an incredibly gruelling development process so, when one is finally bestowed with a name, it stands aloft on the broken and battered corpses of thousands of others that didn’t quite make the cut. Naturally, it’s gotta have something going for it, right?

Eclipse has been floating around for years under the slightly less snappy moniker HPA-016, and has been spoken about in hushed tones of reverence by anyone lucky enough to brew with it. For those dying to get their first taste of what will almost certainly be an internationally beloved hop, you could do worse than seeing how it fares in a pitch perfect West Coast IPA from hop wizards, Akasha.

I reckon this is one of the few beers I’ve had where I simply cannot find anything else other than what’s described in the tasting notes. Like, in hindsight, this whole thing is probably completely superfluous when I could have just copy and pasted “A new, big-hitting flavour hop bursting with sweet mandarin, citrus peel and fresh pine needles.” And be done with it.

In a bright, clean and bitter IPA like this, Eclipse is nothing short of stunning and, quite frankly, I am absolutely fizzing about the inevitability of Eclipse being jammed into every single hop forward beer for the next decade. At the very least, it might finally give Sabro a rest for a few months.