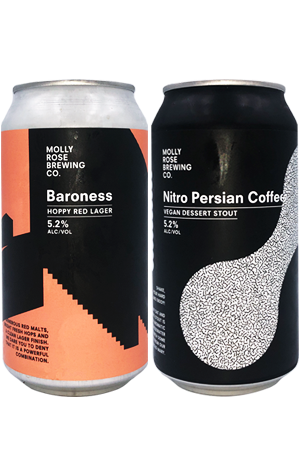 Apparently there's a small army of funky and barrel-aged bottle releases coming any day now from Molly Rose so we'd best get to these two tinnies first. One, Baroness, comes with a coloured label, which to this point has indicated a year round release; here, we're told it's just a wider limited release, an honour granted to a hoppy red lager.

The hops come purely in the shape of Kohatu, an NZ variety said to be mahoosive on the tropical fruit front. At first, in combination with the specialty malts that give it an amber / Vienna lager appearance, I found Baroness to have a highly aromatic / perfumey nose – rosewater, blueberries, bergamot, toasted nougat, a touch of almond – before turning more earthy and grounded to taste. Give it time and its berry-tinged biscuit crumble flavours are joined by vibrant, juicy orange vibes before it wraps up with a drying, distinctly lager like finish.

With Nitro Persian Coffee, Nic Sandery looks to hold onto the hotly contested title of "Australia's leading vegan dessert stout brewer", here adding coconut, rosewater and cardamom to the mix in another ridiculously pillowy release. The head is like an inch thick crema with cardamom kicking things off, coconut adding a broadening creaminess and, as it warms, a herbaceous, citric, almost kaffir lime like character rising from its midst; we're told this may well be derived from the "funky, natural" Proud Mary coffee within. There's a dusty dark cocoa / coffee character lurking underneath, like the adults finishing off their dinner party as the kids enjoy a pillow fight upstairs.