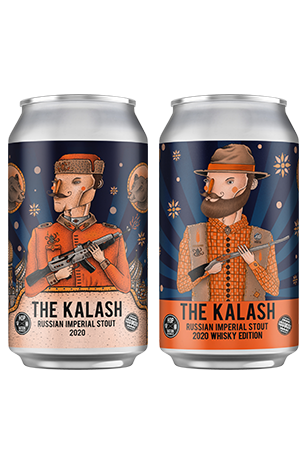 Hop Nation's The Kalash was first released by the then recently-opened brewery for GABS in 2016, with the main vintage each year sticking to the tried and true method of filling bourbon barrels with Russian imperial stout. There have been other versions – tweaks to the recipe, the use of different barrels – over the years and, for 2020, they've put out two versions out in tins as well as an accompanying whisky you can pair with the beers.

The Bourbon Edition tips the scales at a mere 10.7 percent ABV, making it the smaller of the comrades. It’s incredibly viscous and lush and, along with the bourbon notes that shine throughout, you’ll find brown sugar, chocolate, aniseed and spice before you reach the bitter finish.

Then there’s Whisky Edition, for which a portion of The Kalash was syphoned off and aged in single malt barrels from Melbourne’s Bakery Hill Distillery, boosting the beer to 13.4 percent ABV. If the three percentage point difference wasn’t enough of a clue, one sniff makes it clear that here's a far bigger beer, one that's picked up a huge hit of peat from the Bakery Hill barrels. Beneath that lies those same rich undertones of chocolate and an earthy liquorice character too.

Once the Whisky Edition was ready for packaging, the barrels were returned to Bakery Hill who used them to finish off their own whisky, The Blunderbuss, and you can grab that unique drop from the distillery here.

Launching at the brewery on June 5