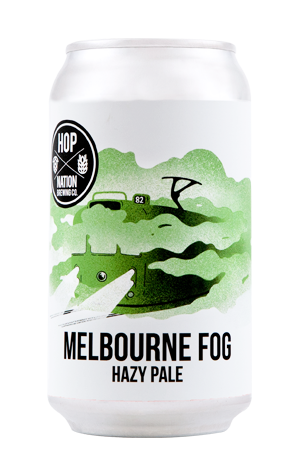 There's been many a beer make the transition from keg to can during the pandemic and you can add Melbourne Fog to the list. The pale ale started out as a collab between Hop Nation and Melbourne's Whitehart Bar and sits within the brewery's ever-growing canon of hazy, hoppy releases.

It's a combination of Nelson Sauvin, Loral and Mosaic hops in partnership with no less than 50 percent oats in the grain bill that delivers the dense fog as well as hop flavours so textural it's almost like drinking fleshy fruit. And that experience is there from the off, with aromas of fresh mango not a million miles from the brewery's Punch kick-starting proceedings. Low in bitterness and with a touch of pale malt sweetness, it's like a mango NEIPA without much in the way of booze.