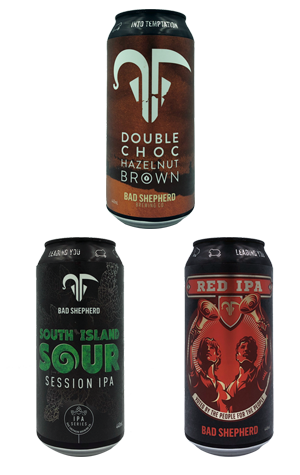 They're never shy when it comes to releasing new beers but, for their fourth birthday, Bad Shepherd went on a little splurge. The Red IPA was the official birthday beer, with the style voted for by their fans. Pouring a rusty deep orange, it mixes floral and berry hop aromas with toffee and a deep, broad, toasted bitterness. Indeed, it's a bitterness that packs a punch, one bigger than the restrained aromatics might lead you to expect.

The South Island Sour comes with the "session IPA" tag and is something of a three-in-one beer, with the various elements standing apart from each other. The citrusy, tropical Kiwi hops – Riwaka, Motueka and Taiheke – deliver a full on lime-citrus character on the nose, one that takes on an oily texture on the palate, where the lactose creates a sweet stickiness. It's kettle-soured too, which contributes a tangy edge and a hint of funk to the aroma too.

The pick for me, perhaps unsurprisingly given it's a beefed up version of their cult favourite, is the returning Double Choc Hazelnut Brown. The brewers have managed to pump up every element – the chocolate, the hazelnuts, the creaminess and the drying toasted finish – of the original and keep them all in balance. More drinkable than a beer of such size has any right to be.