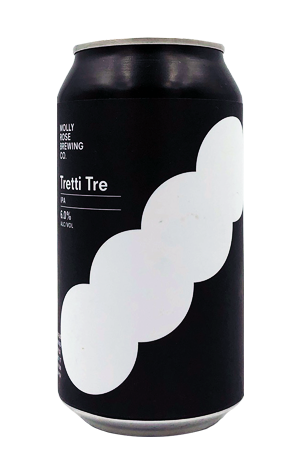 Plenty of brewers have been playing with strains of Norwegian "super yeast" kveik, a centuries-old new arrival on the Aussie brewing scene earlier this year that caused quite a stir due to its ability to ferment insanely fast and at temperatures so high they'd destroy almost every other brewer's yeast. For the most part, brewers have opted to use them in IPAs and, in our experience, they've ended up with beers with something of a chewy, stewed fruit character, which we can only deduce is a characteristic typical of kveik beers.

Tretti Tre from Molly Rose follows the trend of using the yeast within an IPA, but stands apart from most we've tried. It's leaner and less stewy in character, for one, and looks like a deeply hazy pineapple juice. I picked up stonefruit, ripe pineapple and pithy aromas, but also something deeper and herbal, bordering on a subtle Asian spice. There's a texture that's soft yet with a tangy edge and a zesty bitterness too.

As for the name, Tretti Tre means 33 in Norwegian – the temperature at which the beer fermented, which it did in a rapid three days.