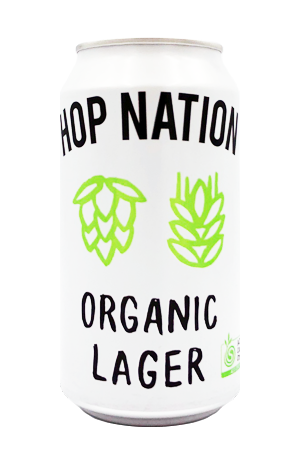 Flick through the Rolodex of new releases from Hop Nation over the past couple of years and you'll find barrel-aged blends, hazies aplenty, fruit sours and wine. Yet the beer they've been putting as much time and effort into as any is something rather more straightforward: a lager. A lager in which the most remarkable or distinctive part is the fact it's certified organic: brewed using organically grown hops and malt.

It's been designed with summer sessions in mind and, presumably, in the hope it becomes a volume-shifter for the Footscray team; even the jauntier, simpler appearance of the cans speaks of easy-going drinking. For all that, making a good lager is no easy task, and here the Hop Nation team have constructed one with floral, blossom-like aromas as soft as the pale malt sweetness, a rounded mouthfeel, and a gentle, broad and faintly herbal bitterness.

It's been far too long since I enjoyed a beer in Munich's Englischer Garten; were I there now and someone handed me a stein filled with this, I'd be more than happy.

Launching at Hop Nation on the weekend of October 25-27 with $5 tinnies, $10 pints, and specials on takeaway purchases.