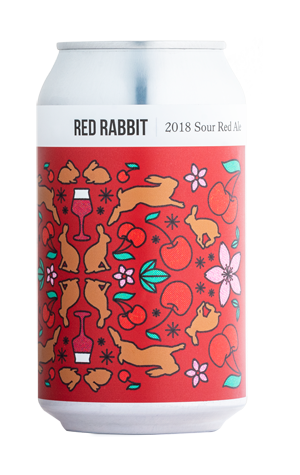 The transition of the Site Fermentation Project beers by Hop Nation from bottle to can continues with Red Rabbit, a beer that owes something to their La Jeunesse Flanders style red and the Lapin Cherry Sour Blonde that was its immediate predecessor. It's a red ale that was initially aged in an oak foedre before being re-fermented on the very same cherries that lent their character to the Lapin.

Inspired by Rodenbach's Alexander, Red Rabbit might have a claim to being the most intense experience found in a can in Australia to date. Certainly, it's not the sort of beer you'd use to welcome a newcomer to the world of sours; well, unless you're the kind of person who figures 500 micrograms of LSD is as good an introduction to the world of psychedelics as any (well, we are talking acid here...).

The beer pours a cloudy, ruddy, rusty amber colour and its acidic side appears first and hits hard – clearly, it's the prominent characteristic among the beer's layers. Once your olfactory system has readjusted, there's heaps of sharp cherry and intense berries, some aged malt and dusty oak too. It's a reminder of just how far the beer world and (some) local palates have come in recent years, especially arriving in tinnies rather than ornate caged bottles.