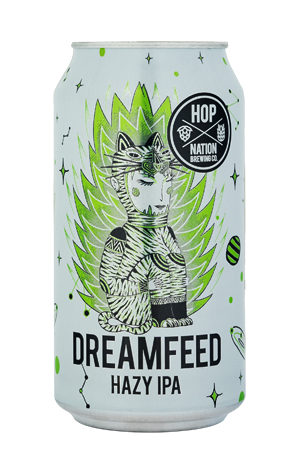 They were one of the first local operations to explore (intentionally) the world of hazy IPAs, have released more than their fair share and, in Jedi Juice, have one of the most popular. So expectations are going to be high when Hop Nation release another into the world. And expectations will likely be met with Dreamfeed, a beer that shows what can come from working within a style over and over.

Unlike, say, their spiced Market IPA, there's little out of the ordinary here, other than, you might argue, the use of relatively new hop Loral alongside Mosaic and Citra; it's a variety that can give brewers a dose of Old World character underneath the fruitiness found in most popular new hops. That said, this remains a pretty by-the-rules hazy IPA (if they've been around long enough for rules to apply).

Densely hazy, tropically aromatic and with a touch of pine and herbaceousness in its midst, it's both full-bodied and lively on the palate, the latter aided by its carbonation and a prickly nature. There are layers of hop flavour and a welcome lick of bitterness in a hazy IPA delivered with poise and balance.