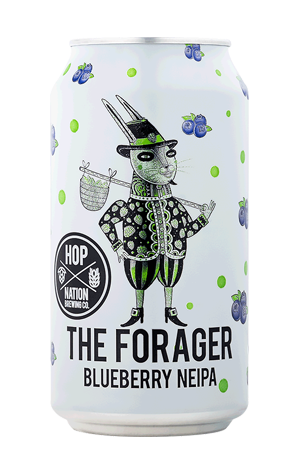 The Forager first made an appearance late in 2018 as another entry in Hop Nation's NEIPA family, in this case adding blueberry to the mix. After receiving feedback on the beer, they decided to give it an overhaul ahead of its reappearance, with raspberry introduced to give the berry side of the beer a little more oomph. What's more, due to the increased acidity from the berries, a little lactose has been added this time around.

As brewery co-founder Sam Hambour tells us: "While we are always subtly altering beers in house usually due to seasonal ingredient changes, this recipe change is significant enough that we are happy to announce and share it to the people."

Aside from the berries 'n' cream, the beer is otherwise unaltered, still featuring blueberries and double dry-hopped with Moutere and Citra. It pours a cloudy soft pink, with the raspberries repaying the brewers in joining the sticky citrus / tropical fruit cluster that meets your nose. The blueberries come into play in a more subtle, earthy and drying manner on the palate, with a building and somewhat grippy bitterness there to add balance.