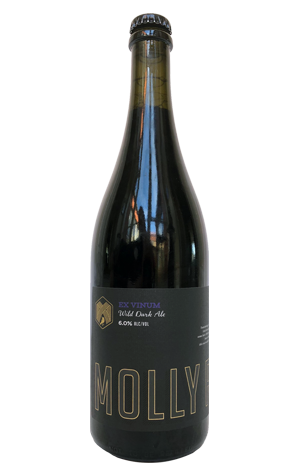 Another Molly Rose release with a storied history. It started out when Nic Sandery was working vintage at a Victorian winery and, as he puts it, "borrowed" five kilograms of Heathcote shiraz. This was co-fermented with a no hop stout in which he says the wild yeast and bacteria native to the grapes were allowed "to go crazy". He kept hold of this new colony of yeast awaiting an opportunity to use it on a larger scale, which ended up being within a dark ale added to a freshly emptied chardonnay barrel.

The beer that followed the wine into the oak was a dark ale, one at the deeper, fuller, borderline porter end of the scale, and it appears to have made a happy bedfellow with the prior occupant. For, while there's a hint of sweet, almost balsamic, acidity detectable on the nose, it developed less outré characteristics than Nic expected. Instead, you have a fulsome beer with relatively low carbonation in which the dark chocolate of the beer melds with cherries, plums and a little spice, not to mention a gentle vinous acidity, to create something equal parts dark ale and red wine.