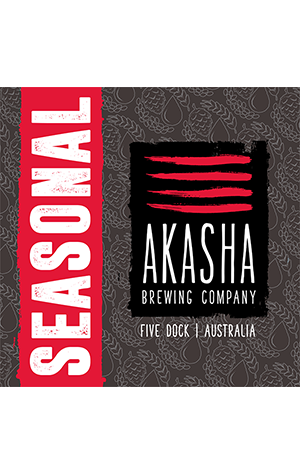 Cast your mind back a year or two. It’s not that long but in some ways a lifetime, and certainly so in the swift moving beer world. It was a simpler time, one when extreme murkiness in an IPA was likely to be perceived more as a fault than a fad. How times have changed. Few are the breweries that haven’t toyed with a "hazy" New England style IPA.

When Akasha unfurled its Lupulin Fog at the 2017 GABS festival there were few local versions of the style. Here was a super fruity beer strikingly low in bitterness. It was definitely different, but they believed in it. They also believed in the style and believed it would stick around. They were right on all counts. Drinkers loved it – it came runner-up in the People’s Choice award and picked up one of the spots on our "Best Of" list for NSW last year.

Now it’s back and you can smell it before it gets near you, like someone’s wandered past wielding a bowl of freshly cut oranges. On the palate it’s a riot of tropical fruits with a pithy bitterness, the fruity mélange settling in with no sense of cloying sweetness. At 8.5 percent ABV, it’s kind of up there, but is little more difficult to drink than a glass of actual fruit juice.

Lupulin Fog may have been many people’s first encounter with a New England IPA but it was a good one. It stood out. Tellingly, among a now crowded field, it still does.