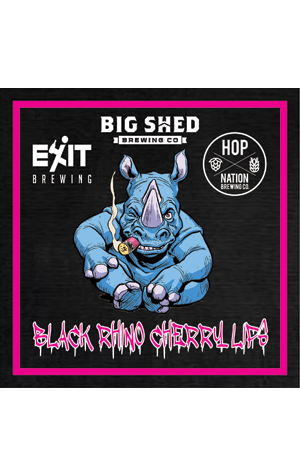 While Hop Nation's collabs have tended to be relatively sensible, Big Shed's – particularly with Doctor's Orders – have known no bounds. And it appears this one has headed in the latter direction. Apparently, as ideas were gathered, a point was reached at which the cry went up: "OK, no more ideas. This beer is getting a bit fu**en weird."

So what is Black Rhino Cherry Lips? It's a kettle soured dark beer with salt added to the boil and Morello cherries appearing late in fermentation. It's very limited in volume (we've not tasted it), with those responsible describing it thus: "Black in the glass, with aromas of cherry, chocolate and a hint of smoke ... with a sour tang hit to start before the complexity of sour cherries and peaty smoke characters linger on the palate."

And select venues in Sydney and Melbourne