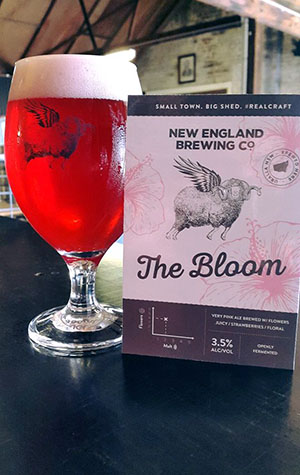 If hops are all the rage in Australia, this may well be the least popular beer in the country. The Bloom is the latest seasonal from the New England Brewing Co. and it’s a beer made entirely without hops.

Where to place this beer is a bit tricky. There’s really no way you could call this beer a gruit for it lacks the herbal concoction, but it’s still very much ‘normal’ in that the same water was used, the same malt was used and the same yeast used. It’s just that instead of adding hops they added four kinds of flowers: Hibiscus, Calendula, Rose and Lemon Verbena. So, what’s that like?

For a flower ale it seems slightly romantic to say, but it’s really bright and quite beautiful, glowing a colour somewhere between red and pink – the work, you would think, of the hibiscus. There’s no sweetness to speak of but rather it’s tartness and dryness that comes to the fore. Such is the effect that you’d be tempted to suggest it might be the product of a sour mash but it’s not; think of the tartness of cranberry juice and you're in the right area. At only 3.5 percent ABV and a barely perceptible 3 IBUs, The Bloom is a very refreshing beer that’s undoubtedly unique but would hardly be out of place when lined up amongst the wave of light fruit sours and goses that Aussie brewers seem to be releasing with increasing regularity.

For many years there’s been talk of hop shortages crippling the craft beer industry. Perhaps that’s not actually such a big deal, provided the flowers continue to bloom.