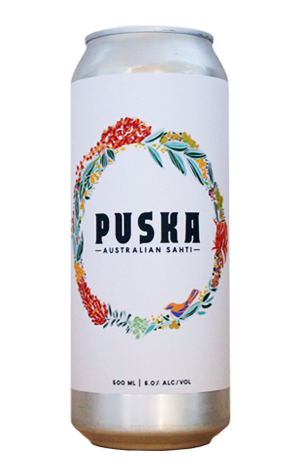 The New England Brewing Company has long embraced its esoteric side. Among the more traditional beers that form the brewery’s bread and butter, they’ll enthusiastically plug any gap in the brewing roster with beers such as a dark farmhouse, hopless flower ale or peppermint gum XPA. This latest beer, Puska, fits snugly with such company.

It’s based on a relatively obscure Finnish beer style called Sahti, a malty ale notable for its use of juniper in place of, or in addition to, hops. New England’s version is an Australian interpretation using eucalyptus branches in place of juniper to create a de facto mash filter. On top of that they added wattle seed and pepperberry and the result is genuinely intriguing – and in a good way.

The aroma sits somewhere between being fruity and herbal with some gentle yeasty esters, while on the palate it’s dominated by malt that fills your mouth with a thick sweetness and provides a lush base on which the oddities have room to perform. You might not accurately pinpoint the the eucalyptus if you didn’t know it was there though it most definitely is, sprinkled with a liberal dash of the native spices that range from pepper to cinnamon. Puska is complex, interesting and also looks damn fine in its wreath wrapped can.