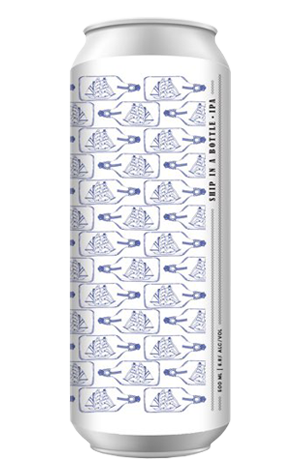 They have a habit of making ordinary things a bit more interesting at Uralla’s New England Brewing. It’s a trend you can trace back to when they’d just started out and chose to add a Golden Ale to their regular range. That’s a style generally characterised by subtlety and restraint and thus frequently maligned in beer circles as falling short of interesting. New England’s was different on the local spectrum because it was Belgian influenced, using a busier yeast to add all sorts of interesting aromas and flavours (and we say “was” because the beer was, sadly for fans, relegated to limited release status in mid 2017). There’s a similar story at play in this release, Ship In A Bottle.

Taking a literal look at it from the outside and, aside from the rather pleasant repeating ship patterns on the packaging, you’ll notice that SIAB has been labelled an IPA. And while that’s true, it only presents half the story. Were you to park this beer on the chaise longue to do some analysis and attempt dig further into the beer’s personality, you may well find it more comfortable being called an India Saison.

Yes, it’s got plenty of hops but they’re not just the usual suspects from the USA. Instead they’re from New Zealand, Germany and Japan and these combine to offer a lemon, lime and citrus character. But the yeast has evidently been vigorous in its work as the beer presents with banana aromas and a spicy pepperiness. Somewhere between these two disparate points on the flavour spectrum the ship finds its balance, stands up tall and sends you on a most interesting and rewarding journey. Get on board.

And other good beer outlets in NSW, QLD & ACT