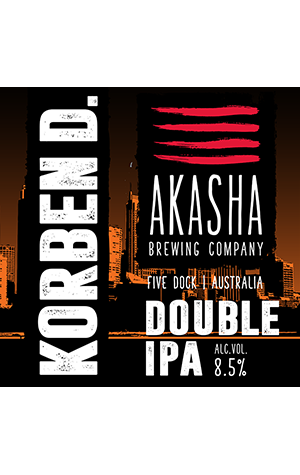 In this age of rampant consumerism and unending self entitlement we, as one of the world’s more privileged societies, have come to expect everything all of the time – and we damn well expect it to be good, too. So when you can't get something you want, you get angry; there are surely a hundred others out there prepared to serve your need for immediate satisfaction. But there can be such pleasure, such reward, in being made to wait. And that, albeit with a little less exuberance, is the general thinking behind the release of Korben D, Akasha’s double IPA.

This is a beer that first appeared at the very end of 2015 and was much lauded at the time, leading to calls for it to become a permanent fixture in Akasha’s range. But the brewers opted to limit it to a quarterly release and use each surge of excitement around its impending arrival to hammer home the “fresh is best” message that so benefits beers of this style. Thus, throughout 2016 the seed of that message grew to the point where the first Korben D of 2017 was dispensed to some 40 venues across three states and a territory for something resembling a nationwide launch party where the beer would be tapped immediately upon receipt – the same concept used to such great effect during the bi-annual release of Feral’s Tusk. So, does Korben stand firm in the face of hype?

With a bright golden colour and excellent clarity, it appears close to the average image the term “beer” might conjure up in a word association game. But that’s as close to average as this beer gets for it’s a big, hoppy brute of a beer brought together with great finesse; on the nose it’s flush with passionfruit, plus a handful of other tropical fruits in subtler doses; in your mouth it’s a crisp, fruity beauty that has a gentle sweetness to help disguise its more monstrous size and intentions; the bitterness tip-toes imperceptibly along your tongue before lacing up some heavy boots and stomping around the back of your mouth. But, all up, it’s lean, clean and drinks like a dream.

If you want an example of why they say fresh is best in big American IPAs, this is one to seek out when it gets a limited release every three months.