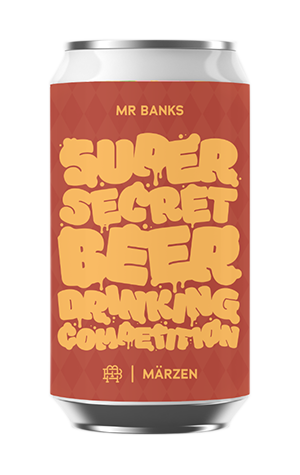 They'll throw any amount of hops at hazies, fruit at sours and adjuncts at stouts but, when it comes to lagers, Mr Banks tend to keep things simple and let the classic styles stay, well, classic. Oktoberfest is a fitting time to be brewing traditional lagers too, and Mr Banks have set their classically-minded brewing techniques to a Märzen, letting their version lager for an extended period before being released in September 2021.

Although not quite as historic as the style, the beer's name of Super Secret Beer Drinking Competition pays homage to another classic, the 2006 film Beerfest.

Considering drinking a modern Märzen might be as close as anyone in Australia can get to visiting Germany for some time, it's fortunate the Melbourne brewers have gone for a beer that could well transport you to a sunny beer garden, with the golden amber drop providing a slight caramel aroma and soft biscuit and toasted notes to taste. Couple that with a beer's gentle floral notes, clean finish and substantial bitterness and you have a beer that's moreish enough to be well-suited to be enjoyed in the sort of glass you need two hands to grab.

Available through the Mr Banks webstore and good beer retailers.

Two For One Beers at Mr Banks