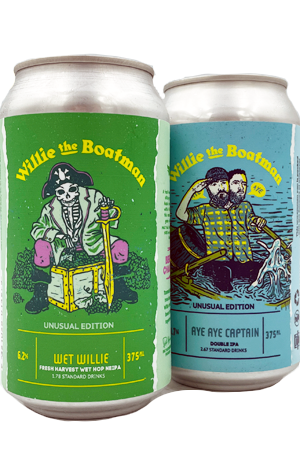 Given they decided to call their wet / fresh hop NEIPA Wet Willie, it's perhaps a surprise the double IPA released by Willie The Boatman around the same time didn't come with the prefix Big. Then again, the punsome title it bears is rather smarter and far less smutty, suitable for a beer of its tight nature (of which more later).

First up (as you'd be wise to tackle it first of the two) is Wet Willie, their 2021 harvest ale for which fresh Enigma, Galaxy and Cascade hop flowers were fast-tracked to their inner west Sydney home and lavished upon a NEIPA base. It's a combo of style and hop format that seems made for one another, creating soft, rounded aromas like the fruit crême filling you'd find inside a fancy chocolate. Sweetly tropical, with grapes and stone fruit in the mix, it's equally soft and smooth on palate – as a good NEIPA should be – complete with next to no bitterness and a hint of a twiggy earthiness in the background, a reminder of the process behind such beers.

As for Aye Aye Captain, it's processed hops from the US – the predominantly old school Cascade, Centennial, Columbus, Citra, Simcoe and Azacca – tasked with entertaining your olfactory system. Before I checked out the label, I'd have sworn there was some Kiwi hop action at work too due to the lean, dry, faintly diesel-y character underpinning the dankness, in part I suspect due to the fact it's a nigh on 9 percent ABV double IPA. Give it time in the glass (and for your palate to reset after Wet Willie) and you'll find some peachy, floral, and kaffir lime elements joining the party in a beer with a suitably pithy, drying traditional DIPA bitterness. A palate-beater following the caress of its fresh hop companion.