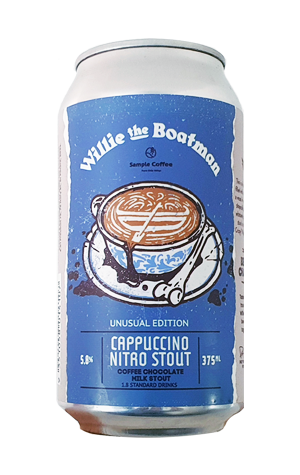 We love experimentation and novelty in the craft beer game. It’s in our DNA. But even amongst all the craziness, it's good to be reminded brewers aren’t only interested in releasing a beer once then forgetting about it. Brewers get great satisfaction from returning to a recipe, making a change, and brewing a beer they enjoy even more.

In winter 2019, Willie the Boatman brought out their Cappuccino Stout, a milk stout with coffee and chocolate. It was a delicious beer, and well received by punters. But brewers are always their own biggest critics, and while Pat McInerney recognised it was a good beer, he thought the lactose sweetness was too prominent.

So, when winter 2020 hit, a new release of Cappuccino Stout came with a difference - the tinnies were now charged with nitro. With nitro’s beautiful cascading effect as you pour it into a glass, and the resulting creamy texture, it’s easy to understand why brewers will sometimes add it to a beer for novelty’s sake (no complaints here). But nitro also distributes flavours more evenly due to its smaller bubbles, making it less aggressive up front and more rounded out. In some beers, that detracts from the effect, and can even serve to dampen the flavour.

In the case of Cappuccino Stout, though, Pat found it was exactly what he needed to dial back the sweetness and make room for the other ingredients to bring their best to the table: the Colombian and Rwandan coffee beans from Willie’s neighbours at Sample Coffee; the Tanzanian roasted cacao nibs from Zokoko chocolate makers; the 100 percent pure vanilla extract.

If you like creamy stouts, the clean taste of cold brew coffee with an edge of dark chocolate, earthy hints of tobacco, and a drop of chocolate vanilla milkshake to finish, there’s a good chance you'll agree with Pat that this nitro version of Cappuccino Stout is even better than the original.