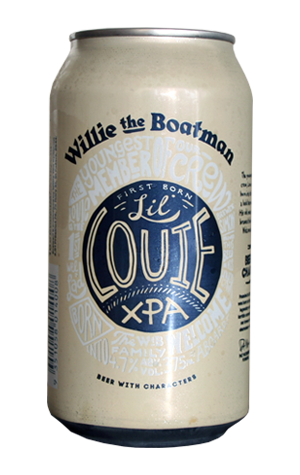 Given the fact that all things must change over time, any businesses with a desire to be around for more than a fleeting moment has to be willing to adapt. You’ve got to be open to new things coming your way. For example, in the beer world, few would have foreseen that a style called XPA would come out of nowhere to become a booming beer category in the space of a couple of years. When Willie The Boatman first opened its doors the style du jour was a simple pale ale, so they made one – Todd’s Trailer Ale. That beer’s not on the roster any more, but Lil Louis now fills its shoes.

It’s something of a sign-of-the-times beer, a tweaked Trailer Ale recipe given a new name (in homage to the newborn child of one of the brewers) and a literal X factor. It’s the kind of beer you take a gulp of and instantly understand why XPAs have become so damn popular. Notably pale in appearance it puts forward tropical and citrus fruit flavours that are enough to grab your attention without allowing the bitterness to ruin the pleasantly dry finish. At 4.9 percent ABV this is a beer that gives you plenty of punch without doing damage.