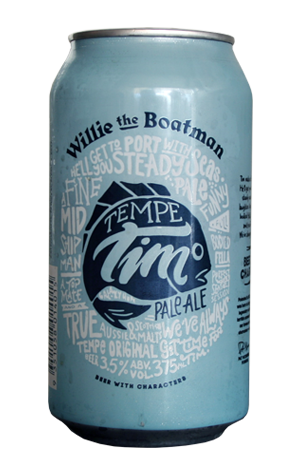 Tempe Tim is destined to hold a special little place in the history of Willie The Boatman as it was the first new beer of theirs to feature in canned format. But beyond that it’s likely going to have a place in people’s minds simply because it’s a lovely little beer.

They’ve labelled it a pale ale but at just 3.5 percent ABV it’s a bona fide mid strength – not that you’d necessarily know it though. For such a svelte thing it’s got a good dose of tropical and citrus character on the nose, evidence of a generous hopping regime. Importantly it doesn’t lose that flair on the palate where you get a lovely zip of citrus followed by what feels like an entirely appropriate level of bitterness, one that steps forward without casting a shadow over everything else. Tempe Tim is neither thin nor full, just nice and clean and deftly balanced. And, in the end, that’s all you can really ask of a beer this size.