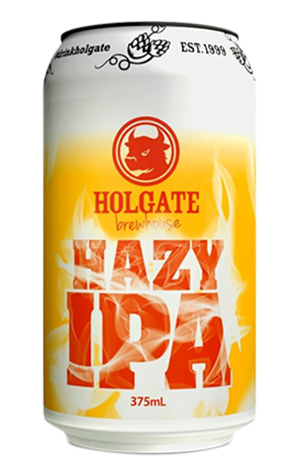 The evolution of Holgate’s regularly released but limited Hazy IPA continues in 2021. The beer’s origins go back to GABS 2017, when the brewery made Cloudy With A Chance Of Mangoes. Since then, Holgate have given it a wider release in kegs, then it appeared in 440ml cans in 2020 before arriving at the present day in a 375ml can.

The beer itself, on the other hand, hasn’t changed so much. And, while mango might have been in the original name, it’s not fruit steering things here. Instead, along with oats and wheat in the malt bill, the Woodend brewers have used large amounts of the US hops Azacca, Amarillo and Mosaic to drive the beer’s tropical fruit flavours. Of those, there’s a strong hit of mango nectar and a slightly softer paw paw character, while peach follows through a little lighter and tastes closer to fruit straight from the tree more than slices bathing in syrup in a can. There’s only a little bitterness and, while it is a hazy beer, it’s also quite lean and dry.