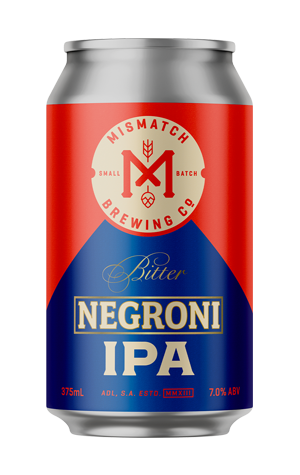 When it comes to collaborating outside the beer world, it doesn't hurt when you share a home with a few other drinks producers. At Lot 100 in the Adelaide Hills, you find Mismatch alongside Hills Cider, Vinteloper winers, Adelaide Hills Distillery and Ashton Valley Fresh, and for this in-house collaboration the brewers have partnered with the distiller. It's seen them bring back an old favourite, resurrecting the Negroni IPA that first made an appearance at GABS in 2016; a red IPA base is the starting point, with orange and Italian bitters added to create a 7 percent ABV cocktail-inspired beer.

Visually, the beer and its inspiration are quite comparable, thanks to the light red / copper colour, while the bitters are where this cocktail beer journey begins, even before the first sip passes your lips. Orange citrus and herbal earthiness from the bitters really dominate on the nose, accompanied by a touch of spice. A mild caramel sweetness balances the bitters a little flavour wise, but, again, it's that orange citrus and earthy, herbal combo that really shines through before your journey reaches a suitably bitter finish.