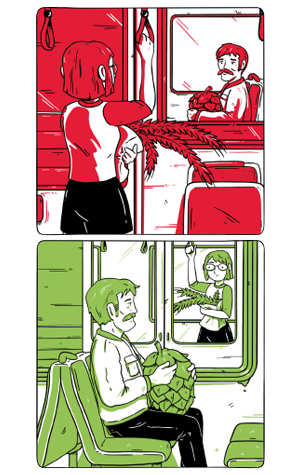 If you were to compile a list of Aussie breweries best known for their hop forward releases, Sydney's Akasha would be up there. And, while they've diversified into many more areas of beer (and wine), Footscray's Hop Nation have a fair few hoppy beers with more than a few fans, led by their Jedi Juice NEIPA in the popularity stakes.

So, when the pair decided to get together to brew a collab, it was only ever likely to go one way. Except it ended up going two ways, and not necessarily as you'd have predicted. They brewed the sort of East Coast style hazy IPA Hop Nation are well known for at Akasha's brewery and, flipping things on their head, a West Coast style IPA at Hop Nation. Both featured just a single hop, US variety Ekuanot.

The former, simply known as East, pours a pale gold with a haze that stops short of opaque, and is the lighter and fruitier of the pair. Citrus and passionfruit hit first on the nose, but there's also fresh grassy, bud-like aromas in there too, with lively pineapple leading the way to taste and a crisp, clipping bitterness completing the picture in a well-made beer that's quaffable as.

West fills your glass with a lovely deep copper colour, hinting at the soft caramel characters that lay in wait. Admittedly, the beer's maltier side is a part player in an IPA that brings out some of Ekuanot's other elements: there are berries and hints of something herbal and liquorice like in the mix, while the bitterness is earthy and slow-building, making for a deeper experience than East.

No doubt the co-conspirators will want drinkers to try both and, if you're a fan of good IPAs, you'd be daft not to.