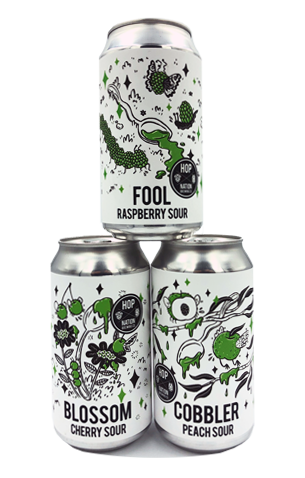 Their Site Fermentation Project may have become home for their more esoteric sour beers but the Hop Nation team clearly feel there's still a place for beers from that ever-expanding realm to live within their original brand. In the case of the "Sweet & Sour" beers, there's room for three that share much in common: each features a hefty addition of fruit as well as a lick of lactose (the sweet).

Taken in the order I opened them, Cobbler is a peach sour inspired by the dessert of the same name. It pours a hazy copper with a deeper sweetness than is typically found in non-barrel-aged fruit sours. The effect is to give the acidity a bolder punch, bolstered further by a spritzy carbonation. The peach wends its way throughout, adding character and a little fruity depth to my favourite of the three.

Fool is another dessert-aping release, with raspberries very much to the fore, lending the beer a hazy crimson colour and a pale pink head. There's a creamy edge to the vibrant fruit aromas (there's some vanilla at play here, too), with a gentle tartness completing the picture on the palate.

Considering the eye-catching nature of Blossom's appearance – this cherry sour wades deep into shiraz territory on that front, albeit with a Parma Violet-hued head to remind you it's beer in your hand – this is the Sweet & Sour with the least dramatic aroma. It's all subtle sour fruits, coming across like a sweet and sour boiled lolly to taste. It's the least perceptibly acidic too, yet still has complexities for those on the look, sitting somewhere between that lolly and a cherry liqueur.