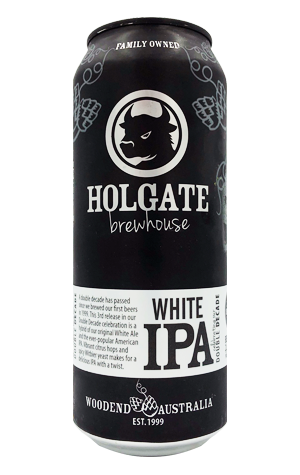 When people discuss past trends that turned more to fads, the black IPA tends to come up more than most. Yet it's a beer that still appears with some regularity, particularly in the colder months. Its inverse, on the other hand, is arguably more worthy of a place in such discussions as white IPAs – typically involving the fermentation of a beer that would otherwise be a straightforward IPA with a Belgian witbier yeast – were lesser seen even in the months after they first "trended", and are seen even less now.

So, even in this age of brewers looking for something unknown with which to capture drinkers' attention, Holgate's decision to create one as part of their Double Decade series makes for a rarity indeed. The idea behind the series is to take their very earliest beers from the end of the last Millennium and beef them up. So, here, a recipe based upon their long-retired White Ale gets IPA treatment.

Some lemony citrus hop aromas flit across the top of the beer and provide a little bitterness, but I reckon the White dominates the IPA here (which, given the concept, is presumably how it was intended). Thus there's Belgian esters aplenty, with bubblegum and soft spices to the fore, plus a little vanilla amid the sticky palate sweetness, creating an experience unlike pretty much any other currently coming from local brewers.