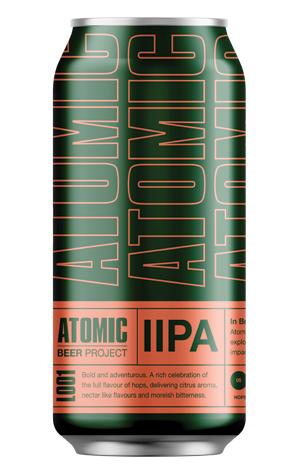 Atomic Brewing Project’s debut limited release is a statement of intent, something which says: "This is a hop focused brewery and, to make sure that you know, we’ve put it in a big can." Moreover, the gridded label design implies serious research and development, conjuring images of checklists and people in coats looking into all things hoppy, a promise on which the liquid inside delivers.

IIPA can mean a lot of different things and here the emphasis is on a clean, West Coast IPA-leaning imperial beer that’s flush with citrus. Pine and sappy herbal notes appear in a very harmonious experience that shows little booze and concludes with a lasting dry, bitter finish.

It’s exactly the type of debut limited release that could send hop fiends into madness and marks a clear delineation of the Atomic Beer Project from its parent brewery, Gage Roads.