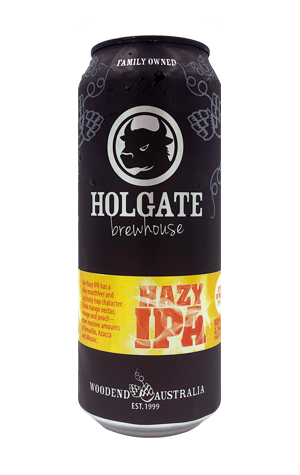 The black tallboy tinnies Holgate unveiled in the lead up to their Double Decade celebrations are back for 2020, with the first beer to appear inside them a rerun of a prior draught-only release. Their Hazy IPA made an appearance last year but even then it was a case of them revisiting their 2017 GABS beer, tagged a New England IPA going by the name Cloudy With A Chance Of Mangoes. Not that there's any mangoes in it.

Instead, they've used wheat and oats to build and soften the mouthfeel and opted for "huge" additions of US hop varieties Azacca, Amarillo and Mosaic to conjure the fruity side. The label talks of mango nectar, orange, peach and "nectar" is perhaps the key word here as the aromas and flavours are in ripe, syrupy territory, delivered with an intensity that brings to mind the sort conjured by the malts in a Belgian golden ale. Haze is present without being opaque, while bitterness is minimal, allowing you to wallow in its sweet, oily, fruitiness.