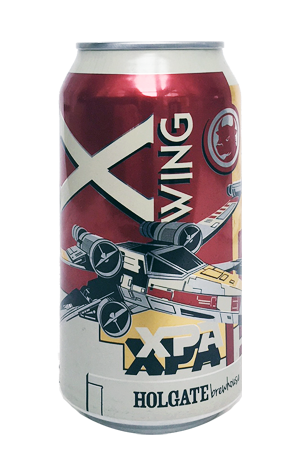 The eagerness with which Australian breweries jump on board the unofficial Star Wars Day, aka May the 4th, seems to be mounting each year. As does their fondness for borrowing names, puns and imagery from the film series. Holgate has been releasing its Millennium Falcon for several years and, in 2018, it's joined by a wingman. As the final scenes in A New Hope remind us, sometimes smaller ships are just as capable of great feats and so the brewers looked to create a smaller beer that was still able to deliver a punch.

Using the same hops as this year’s Millennium Falcon, X-Wing XPA comes with pale and lean, and is all about the hops, pushing out fruit flavours built on a combination of Azacca, Citra, El Dorado and Mosaic. It's a combination that delivers the likes of pineapple, stone fruit and juicy tangerine, as well as lashings of that increasingly familiar Mosaic lolly sweetness, candy blackcurrant and bubblegum.