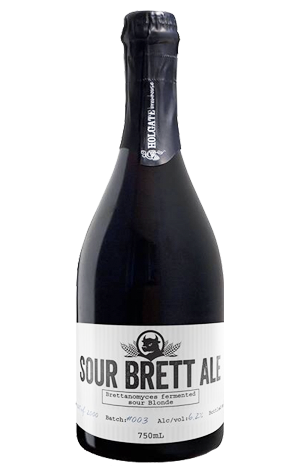 At the time the first vintages of both beers were released, Holgate’s Wild Red Ale and subsequent Sour Brett Ale were met with widespread acclaim from those occupying craft beer’s nerdier corners. Now, the second vintage of Sour Brett Ale has made it out into the world – with the intention of bringing them back every year to showcase the funkier side of beer.

This year’s release follows a similar path to the previous incarnation, using a simple malt bill, which gives the beer its light golden colour, thus allowing the beer's character to be primarily driven by yeast and bugs. For now, the combination of Brettanomyces strains and souring bacteria contribute a tart sourness that supports flavours of mango and stone fruit. Those fruity flavours carry a zesty quality, slightly reminiscent of sour lollies.

For the Holgate brewers (and drinkers), the benefit of this beer being in its second year means they have a better understanding of how it will develop. Based off their experience with the remaining bottles from 2017, there’s an expectation the funk, which is currently rather restrained, will intensify. Because of that, they’re suggesting you grab a pair – one for now and another for a few months down the track – and keep the latter stored at cellar temperatures if you really want the funk to develop.