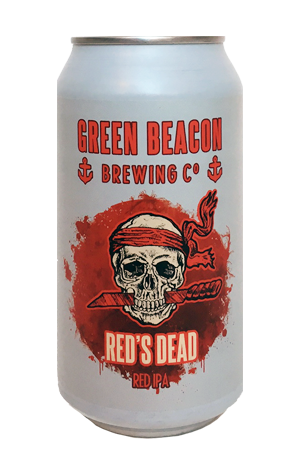 Green Beacon has tended to approach its seasonals as something of a vague theme upon which to riff each year. And the riff each autumn has been based around the interplay of lots of rich malts and plenty of (usually American) hops. A couple of years back, Red's Dead was tagged a West Coast red ale; now, for its first appearance in cans, ready to meet a far wider audience, it's a red IPA. Maybe it's a case of splitting hairs (or figuring the acronym "IPA" entices more eyes than the term "red ale") as the concept remains the same.

So what is that? Piney, grapefruit hop aromas alongside fortified, toasted, lightly roasted toffee malts and, at the point where they meet, something berry like too. There's a drying, resinous bitterness to cut through the layers of malt and a touch of warming booze too. The highlight, however, (well, we're suckers for such things) is the beer's deep chestnut colour. It helps lend the beer an almost austere, gentleman's club kind of a feel – even if the knife-wielding skull on the label suggests something else entirely.