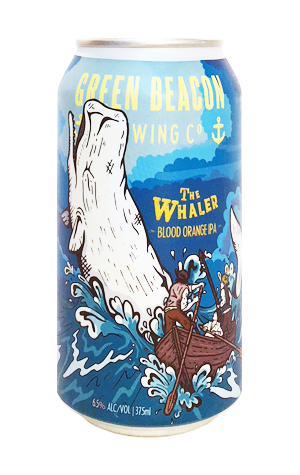 It may have been a golden ale in its earlier days, but Green Beacon's spring seasonal, The Whaler, seems to have decided its comfortable in the shape it's taken since 2015: that of a blood orange IPA. It does continue to evolve a little, however, with the Brisbane brewery's designer coming up with artwork that continues to move these quarterly can releases ever further from the look of the core range.

As for the beer in 2018, it's hazy and at the paler end of the IPA spectrum, but is most notable for the potent blood orange aromas that leap, like the whale on the cans, dramatically from the liquid. It might not be a NEIPA, and indeed doesn't have the fat body of such beers, but, with a relatively low and tight bitterness and plenty of zesty juiciness running through it, it's closer to that world than the brewery's core range IPA, Windjammer.