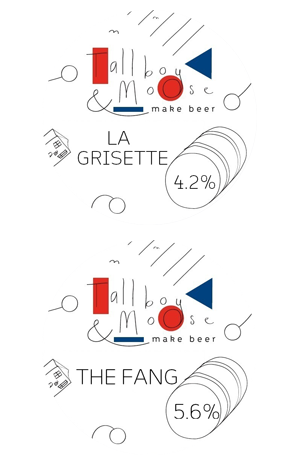 What with the pre-Christmas rush, we're a little behind getting these two beers onto the site, given both were pouring at Tallboy & Moose's brewpub when we held our last blind tasting of the year there in mid-December. Knowing how fast they tend to rip through batches of beer there, hopefully we're not too late...

One is of a style that's been gaining traction in the past couple of years as awareness of and fondness for farmhouse ales has grown (and, no doubt, helped in NSW by the success Shenanigans have enjoyed with their grisettes). La Grisette keeps things simple, even with the combination of two characterful yeast strains and new US hop Lemondrop. There's a little bit of spice, a little pepper, a little citrus and a little malt sweetness, not to mention a dry, saison like finish in a beer they're calling "a little Belgian nod to summer sunshine".

For The Fang, the team looked across the Atlantic for inspiration, adding "mounds" of punchy and aromatic US hops Citra and CTZ to a deep red beer. Look out for rich malt sweetness, bold citrus aromas and a big bitterness. And, if it's still pouring, perhaps try one side by side with the latest ESB iteration Dan "Tallboy" Hall had on tap, Hey Gang!, to see how Americans took darker, malt led English ales and turned them up to 11.