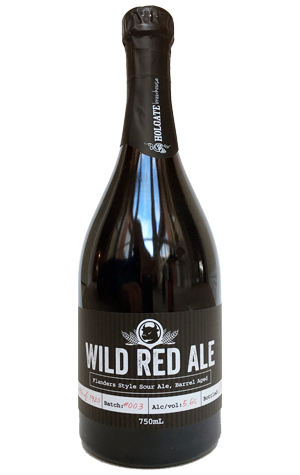 It's fair to say The Crafty Pint team rather enjoyed the first Wild Red Ale from Holgate. And we were far from alone. The Flanders red style ale took out the top spot in our Best New Victorian Beers of 2016 poll, meaning the arrival of its successor was much anticipated. In fact, this year's beer could be described as "offspring" as much as "successor"with a portion of the 2016 batch used to "seed" the barrels this time around, ensuring the mixture of yeasts and bacteria that made number one such a hit live on.

The 2017 vintage spent longer in former Pinot Noir barrels – 18 months – before being bottled and, if anything, its seems a little more tightly wound. The layers of aroma and flavour are all still there: the balsamic like tang, dark fruits and berries, oxidised sweet malts and cleansing acidity plus a creamy vanilla and a grounding toasted character from the oak. Yet, if memory serves correctly, they're hanging together like a more close knit family – less showy and more subtle than round one. Either way, we doubt any fans of Wild Red Ale 2016 will be disappointed.

You can read our Best New Victorian Beers of 2016 roundup here.