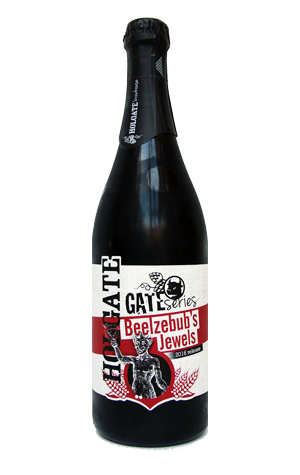 If memory serves, the first Beelzebub's Jewels was also Holgate's first foray into barrels. Then it was very much an experimental "let's see what happens if..." kind of affair. The brewers took their Double Trouble Belgian style ale, popped it into Curly Flat wine barrels and looked to raise its booze levels well above the starting point of 8 percent ABV. It worked out well enough that the following year they designed a brand new base beer and increased the number of barrels.

Since then, it's returned each year, complete with strategically placed dots on the Beelzebub of the label, and has garnered some top level awards along the way. This year's vintage again started out as a Belgian style quadrupel [the biggest of rich, dark ales heralding from that country] then spent time in three different types of barrel: American, French and Hungarian oak before being blended back into the finished beer.

The end result is a deep auburn drop that presents in a manner that straddles the line between barley wine and Belgian quad, with the distinctive fortified candi syrup of the latter present without too much of the fruitier elements certain Belgian abbey yeast strains can produce coming into play. There's a sherry like character too as the impact of the barrels combines with the dark fruit and sweet malts. It's a fireside sipper and one that should develop complexity over time – if you can keep your hands off Beelzebub's Jewels long enough, that is.