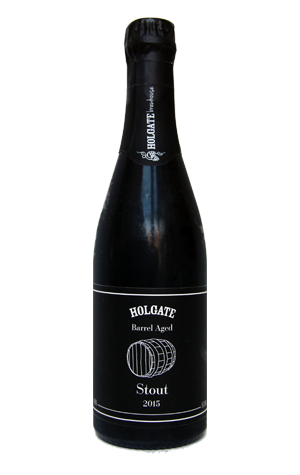 Given how many different beers they've released in their 17 years – straightforward lagers, English and American style ales, Belgians big and small, sours and more – it's quite something that Holgate Brewhouse reached this point without a stout to its name. Perhaps when you've got a porter in your arsenal that has been loved the country over for years on end, there's no real need. And, perhaps, when you do decide it's time, you feel it should be done with a bang.

Certainly, there's been no holding back with this winter release from Holgate Brewhouse. The beer was initially brewed last year by two brewers then new to the team. They were given a pair of American oak barrels to play with and opted to fill them with a hearty stout. After three months on oak, the beer was given another nine to condition in bottle.

The finished beer weighs in at 8.8 percent ABV and ticks a lot of the typical big stout boxes, be that its big body or its blend of dark chocolate, roast and liquorice characters. Where it stands out, however, is in the impact of those three months in oak, which has lent the beer a really distinctive toasted coconut quality.

The label art, for those who like to know such things, was designed by local artist Amanda Santamaria.