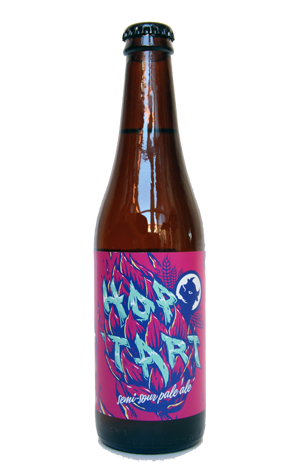 In 2015, one of the many limited run beers to make its way from Holgate's baby Tank 9 was Hop Tart, a "Semi Sour Pale Ale" in which the brewers played around with souring bacteria Lactobacillus to create lactic acid and, thus, a spot of sourness within a relatively hoppy ale. To achieve their goal, they chose to naturally sour their wort [the sugary liquid produced early in the brewing process after crushed grains are soaked in hot water] by giving it an extended rest in the company of the aforementioned bacteria. Then, as with their other beers, it was boiled and fermented with house yeast.

They then decided to give the beer a New World twist by adding Aussie and American hops, looking to marry their citrus tones with the lemony lactic tang. The result proved so popular that the beer is now a permanent member of the Holgate lineup, one that arrived in bottles early in 2016 too. Hazy and gold, the brewers describe Hop Tart as having "a zesty aroma of citrus and bright tropical fruits", "a surprising light tartness that blends beautifully with the lemony hop character" and a finish that's "clean, slightly sour, dry and refreshing". Certainly, it's a step or two removed from the sort of beers you find in most breweries' core ranges.