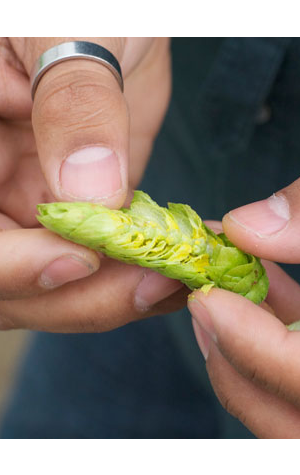 Now isn't that a name that rolls off the tongue: Crosby Idaho Experimental #4. It's the sort of name Aphex Twin would give to a track featuring his mother singing lullabies, her voice mangled through a handful of homemade vocoders then merged with the sound of a pneumatic drill pounding the deep end of an abandoned swimming pool recorded on an old spy microphone from inside a bird hide. Remarkably, however, it isn't that. It's the latest small batch, draught only beer from Holgate.

The reason for the name may be deduced by those who receive our weekly newsletter and studiously read all the links therein – or who merely read beer news from around the world – as it refers to a new hop variety from a farm in one of the American states where hop farming is on the rise to help counter shortages (and because if you were a smart farmer in the right climes wouldn't you have planted hops a few years ago?). We'd hoped that this meant there had been some secretive mission to Idaho by one of the Holgate brewers to smuggle the hops out, what with this being the first beer in Australia to feature the variety. But the reality is more prosaic (damn you, mundane plane!).

According to brewer Chris: "Guy sells hops, we buy hops."

Said guy is from Beerco and he's started bringing in Crosby's hops. This one is an experimental one from Jackson Farms and we're told it displays "delicate floral and citrus characters reminiscent of Amarillo and Cascade [presenting] perfectly in an American style pale ale showing plenty of citrus hop zing." Eleven kegs only.