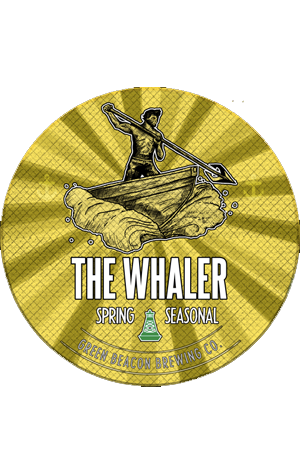 Another beer from Brisbane's Green Beacon drawing inspiration from the nautical world from which it takes its name. The Whaler is the brewery's 2014 Spring seasonal and comes from the story of The Duke of York, an old old wooden ship built in 1817 that traveled from London to Kangaroo Island, carrying passengers that would establish the first free settlement in Australia.

The story goes that in September of 1837, on a golden Spring morning, the Duke met her fate. On her maiden voyage as a whaler, the Duke was wrecked north of Moreton Bay without catching a single whale.

As for the beer, it's a golden ale brewed with European spring barley for a sweet malt character, and comes with an "assertive bitterness and a dry finish with a distinct 'Burton snap'." The brewers added orange peel for a "zesty aroma of citrus blossom" backed up with the citrusy effects of two American hop varieties.