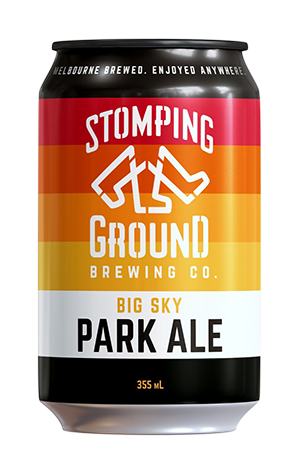 Whether it’s on tap at one of their three brewpubs, released in tins or coming in the shape of an occasional bottle, new beers from Stomping Ground are a frequent sight. Much rarer is a new addition to the Melbourne brewery’s core range, with the three members of the “Stripe” series having stayed steady for some years in the shape of Gipps St Pale Ale, Hop Stomper IPA and Laneway Lager.

Right as summer kicked in towards the end of 2021, however, a new member joined the ranks with the launch of Big Sky. Given the brewers have declared the beer’s style to be a Park Ale, it shouldn’t be too surprising to learn it's designed for drinking on a warm afternoon or evening, with the golden straw and hazy beer almost resembling the sun blocked with only the faintest whisper of cloud.

With a combination of Citra, Sabro and Ekuanot hops at its heart, Big Sky provides a mix of rockmelon, pawpaw and citrus that sit above a soft and quite luscious base. Add in the beer’s slight bitterness towards the end and a dry finish and you have a sessionable beer that fits in as naturally with a Melbourne park as the grass between your toes and sight of slacklining in the distance.