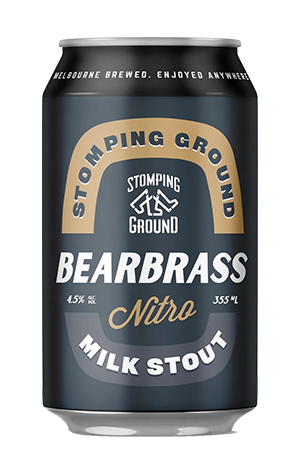 There’s a fair bit of history to this limited release tin from Stomping Ground. For one, the name Bearbrass was among the first that European settlers knew Melbourne as, apparently due to a misunderstanding of Birrarung, the name of the Yarra River in the language of the Wurundjeri. Fast forward quite a few decades and Collingwood’s first brewery in some years opens and among the first beers they pour is a nitro milk stout named after that early peace of the city's history. It's been a staple at the brewery since too and now in time for Easter 2022, they've released that beer in tins with something of a Wonka-esque Easter egg competition where a limited number of golden-topped cans can be found - the details of what's involved can be found here.

Assuming you might be a little more interested in the beer over a Melbourne history lesson, we should also add that the beer has a smooth, silky and creamy body thanks to that nitro, which also ensures it pours with a creamy off-white head. The flavours meanwhile include fresly-roasted cocoa, sweeter touches of milk chocolate and espresso that come together to ensure that even ignoring the excitement of cracking a nitro tin, cracking a second tin is as easy as it gets.