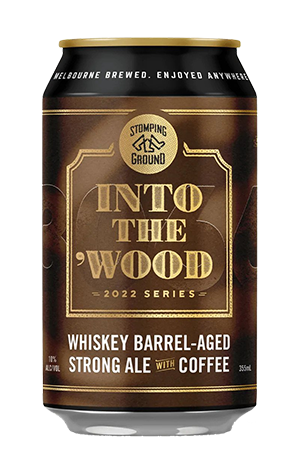 Stomping Ground’s Into The ‘Wood series hasn’t just seen the brewery explore the wonders oak can have on beer but has also been driven by a desire to showcase liquids made by their mates. Often those have been local distilleries but when it comes to Whiskey Barrel-aged Strong Ale With Coffee, the Melbourne brewery have teamed up with two different outfits. One is their near neighbours in Collingwood’s Proud Mary coffee and the other is their not-so-near neighbours in Westwood Whiskey, which is based in Portland (Oregon, rather than Victoria). As it turns out, there's a further close connection there too with Proud Mary having a second home in Portland.

It's a release that takes beer, coffee and spirit and combines them quite seamlessly, with there being much of a big balanced Belgian at its heart thanks to its orange appearance, clove and peppery yeast esters and lolly notes that are spurred on by the addition of golden syrup. That time in Westwood’s barrels provides light touches of whisky which add both some boozy warmth and caramel to complement the beer's sweeter side, while the cold brew from Proud Mary’s brings espresso, chocolate and a blend of berries.