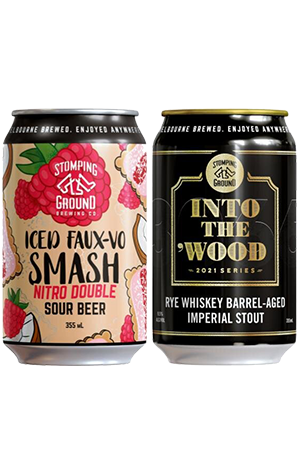 Stomping Ground’s tinnie releases have at times shown Melbourne brewery like to explore beer from many different angles and their winter releases in 2021 are no different. First up let’s, dive into Iced Faux-Vo, which you may have already tried at Stomping Ground’s glorious Melbourne GABS stand which leaned heavily into their Smash series and took its cues from a fruit and veg market. The beer itself was inspired by the classic Australian biscuit, bringing together raspberry and coconut and adding a touch of vanilla too. It's a beer that's sweet and sour at once, where the sharp tartness of raspberry hits first before the more ice cream-like notes follow through on the beer's creamy body.

The latest Smash isn’t the only series to be back though, with Stomping Ground also returning to their Into The Wood barrel program. Similar to 2020's vintage the 2021 Rye Whiskey Barrel-Aged Imperial Stout has spent months ageing on rye whisky barrels from Melbourne distillery The Gospel. It's a little lighter than the 10.5 percent ABV of 2020 but nonetheless, packs in as many rich lashes of chocolate and roasted notes. It's also picked up a lot from the whiskey, with a peppery spice, vanilla and burnt sugar all combining in the warming beer.